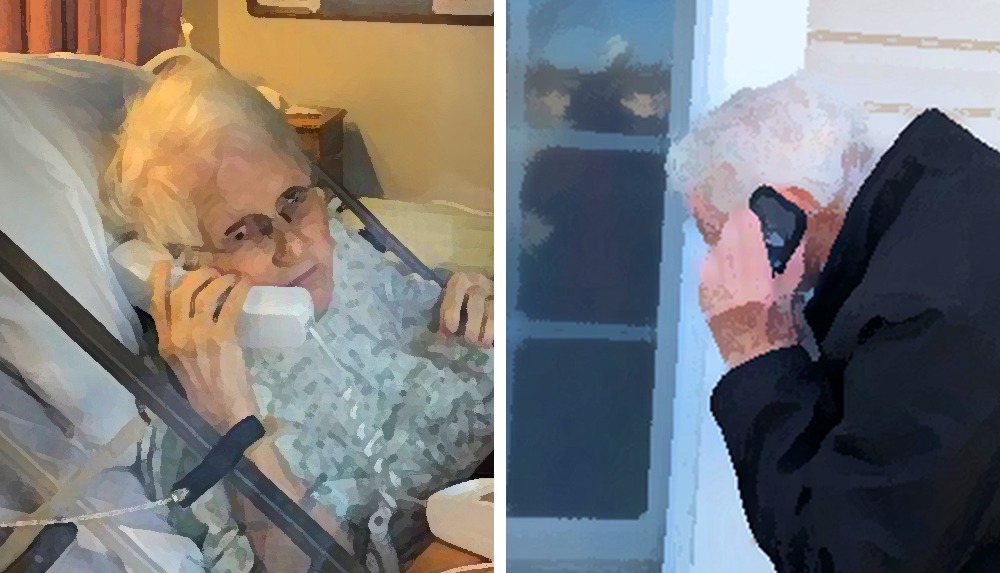 A lot of people muse about what “true love” is. I’ve recently been witness to it, in a very personal way.

My mom, who just turned 90 in August, broke her femur last week. This required surgery and being put into a convalescent facility (thankfully just minutes from where my dad is.) However, she’s in total isolation for two weeks (thanks a lot, COVID!). She has Alzheimer’s, and her ability to remember or understand things is diminished, so she’s lonely, frantic, and calls my dad in tears at night wondering where she is, where he is, forgetting why she is there.

So, Dad has been going to the facility several times a day to stand outside the window of her room, where she can see him. He calls her on his cell phone and talks to her so she can hear his voice. It’s been raining massively here, so several of these “visits” have been with him huddled under an umbrella. Sometimes, he brings a folding chair so he can sit. He’s counting the days of her quarantine until he is allowed to visit—in a conference room separated by a Plexiglas screen. Right now, even that looks like heaven to him.

What do they talk about? Not much. “How did you eat? Did you get physical therapy? Did anyone call?” She can’t always remember, even the person who called a half hour earlier. She says “Maybe. Perhaps she called. I don’t remember.”

She asks “How are you?” He says “Lonely. I miss you.” She says “I miss you too.” Their voices tremble. I can hear the tears, tightening their throats. This is love. This is love at 90.

While we were there, Dad needed help with some de-cluttering. Because it is hard for him to reach high shelves now, my husband and I took a lot of stuff down from the upper shelves. At his direction, we carted away books, appliances, clothes, linens, dishes, furnishings. But one box, he didn’t want to be touched or moved. On the outside was written, in my mom’s handwriting “Wedding Dress.”

“What should we do with this?” I asked my dad. “That stays!” said my dad, immediately. “We ‘re keeping that.”

Now there’s no way that my mom is ever going to fit in that dress, and it’s probably never going to be worn by anyone in the family. But my dad was very clear that this was to remain. This he’ll keep forever.

This whole experience made me realize that love really is the center of life. They’re gradually losing interest—or awareness—of so many things, but the one clear center is that love. I know Dad is afraid of only one thing—that at some point, she’ll forget who he is. I think if she dies—or he dies—still knowing each other, still missing each other, still wanting just to be together—they’ll both be happy.

I am so grateful to have witnessed my parents’ love for each other. I never doubted for a second, when I was growing up, that husbands and wives would love each other, or be faithful to each other. That seemed so ordinary—but now, I see it as rare and lovely.

In their 90 years of life, they’ve been through tremendous challenges. They grew up in the Depression, were teens during WWII, married and had kids during the Baby Boom, and survived several health crises: cancer, heart surgeries, hip replacement, and now, Alzheimer’s. No matter what, my dad has been by her side, taking care of her, cooking, taking care of her most intimate and necessary functions. He even learned how to administer IV’s during some of her treatments.

He has clung hard to the fact that she could walk—with a walker and assistance—to the bathroom or around the apartment. “As long as she can walk, we can live independently,” he told us. Breaking her leg—at such an advanced age, with osteoporosis—may mean a total change of their living situation.

My husband and I were so moved by the tenderness and total connection we saw. As time is passing, as health and even consciousness are waning, their scope is narrowing, and they are letting go of so many things. They’re not interested in small talk—have even let go of politics—don’t care about financial matters. My mom is forgetting some friends, some family members. But as their circle is constricting, the bull’s eye center stays fixed—they just want to be together.

Harvard researchers did a study of a number of students from one class, over a 75-year period. Every 10 years, they re-interviewed them, following the ups and downs of their lives. A president, senators, millionaires, and other prominent people were among those in the study. After 75 years, their primary conclusion? (Happiness equals Love: Full Stop).

When people talk about relationships, marriage, family, often they are thinking of passion, or compatibility, or financial security. I feel we need to think instead about building the kind of relationship where at age 90, we would sit by a window, talking over the phone, and count the days until we can be together again.